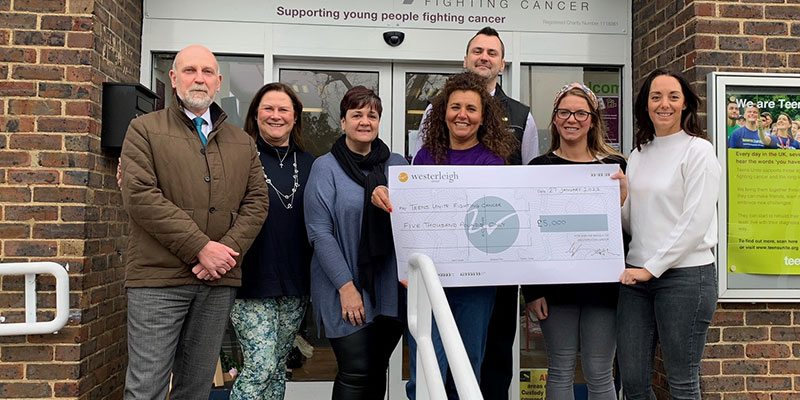 Donations adding up to more than £16,000 altogether have been given to four local charities by Woollensbrook Cemetery & Crematorium in Hertfordshire.

The money was raised through the crematorium’s metal recycling scheme and has been donated to Teens Unite Fighting Cancer, Broxbourne Foodbank, The Animal Rescue Charity and the local branch of the Royal British Legion.

Woollensbrook Cemetery & Crematorium is part of Westerleigh Group, the UK’s largest owner and operator of crematoria and cemeteries, with 36 sites in England, Scotland, and Wales, all set within beautifully landscaped gardens of remembrance which provide pleasant, peaceful places for people to visit and reflect.

Each crematorium within Westerleigh Group operates a metal recycling scheme whereby, with the consent of families, metals recovered during cremation are recycled and any funds raised through doing this is used to support local charities and other worthy organisations.

Martin Langdon, site manager at the crematorium, said: “It gives us tremendous pleasure to be able to support organisations like these, which make such a positive contribution to our local community.”

Teens Unite Fighting Cancer, which is based in Hoddesdon, recently moved to a larger location and provides social, emotional and physical support to people aged between 13 and 24 who are fighting cancer.

The organisation arranges activities, residential stays and offers opportunities to help cancer sufferers rebuild their lives and learn to live with their diagnosis in the best possible way.

Like similar charities all over the country, Broxbourne Foodbank has seen an increased demand for its services due to the impact of the pandemic, and a £5,000 donation will make a significant contribution to the vital support they can provide to local families.

Martin said The Animal Rescue Charity was chosen to receive a donation because he and his staff at Woollensbrook are all animal lovers.

He said: “There has been a spate of people abandoning animals since having to return to work post-pandemic, and charities like this are in deep need of assistance more than ever in order to help them.”

There’s a personal reason for selecting the Royal British Legion in this round of donations.

Martin said: “Since Woollensbrook opened in 2017, the same man provided poppies for us to sell in the office and raise funds for the Royal British Legion.

“Sadly, he died last year and we hosted his service and cremation. We thought this donation was an appropriate gesture for us to make in his memory.”